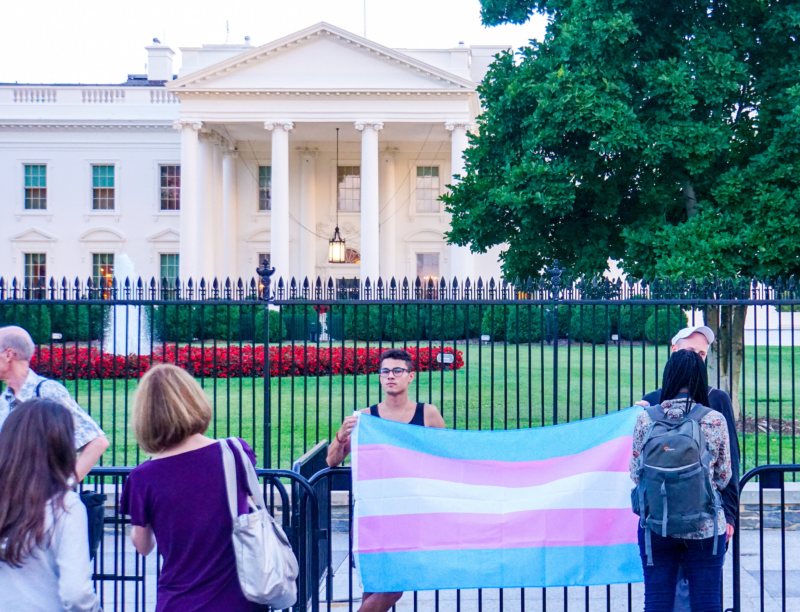 WASHINGTON — 45 has signed a directive banning transgender people from serving in the U.S. military.

Politico reported that directive gives Defense Secretary Jim Mattis until Feb. 21, 2018, to submit a plan. It also leaves decision of whether to remove current transgender troops to Mattis. The order was sent to the Defense and Homeland Security departments. It does bar the military from recruiting transgender people and bars the military from paying for gender reassignment surgery for servicemembers.

Pentagon spokeswoman Dana White Friday confirmed in a statement to Politico that the department had received the guidance but provided no further details. “The Department of Defense has received formal guidance from the White House in reference to transgender personnel serving in the military,” she said. “More information will be forth coming.”

OutServe-SLDN, an advocacy and legal group for LGBTQ service members announced on its website that the organization and Lambda Legal are currently reviewing the directive. “The President’s order to remove transgender service members from the United States armed forces and deny them healthcare is nothing less than a purge,” the group’s executive director Matt Thorn said in a statement. “He is implementing this purge based on bigotry, motivated by agents of an ideology that has no concern for the national defense, and in blatant disregard of the experience of career officers who spent more than a year developing and implementing the current policy.” He said Outserve-SLDN and Lambda Legal will be filing a lawsuit in federal court to challenge the memo.

The organizations are asking those affected by the new policy to fill out this form on the Lambda Legal website or contact Outserve-SLDN at legal@outserve-sldn.org. You can donate to support the legal battle here.

A 2016 Rand Corp. study commissioned by the Defense Department concluded that letting transgender people serve openly would have a “minimal impact” on readiness and health care costs, largely because there are so few in the military’s 1.3 million-member force.

The study put the number of transgender people in the military at between 1,320 and 6,630. Gender-change surgery is rare in the general population, and the Rand study estimated the possibility of 30 to 140 new hormone treatments a year in the military, with 25 to 130 gender transition-related surgeries among active service members annually. The cost could range from $2.4 million and $8.4 million a year, an amount that would represent an “exceedingly small proportion” of total health care expenditures, the study found.

“If you are willing to risk your life for our country and you can do the job, you should be able to serve — no matter your gender identity or sexual orientation,” U.S. Senator Tammy Duckworth of Illinois told the Associated Press on Thursday. “Anything else is not just discriminatory, it is disruptive to our military and it is counterproductive to our national security.”

“The courageous and resilient transgender people who serve and have served our nation deserve to be honored, not denigrated, called a ‘disruption’, and subjected to discriminatory reviews of their ‘deployability’,” said One Iowa executive director Daniel Hoffman-Zinnel. “We call on those who spoke out against this ban when President Trump originally announced it, including Sen. Joni Ernst, to push back against this guidance and ensure our transgender service people and veterans receive the respect they deserve.”

The ban reverses a policy allowing transgender people to serve that was established only a year ago. The directive was issued after a series of tweets in July that were condemned by both Democrats and Republicans as well as LGBTQ rights organizations. Reuters reported last month that a majority of Americans support including transgender people in the military.