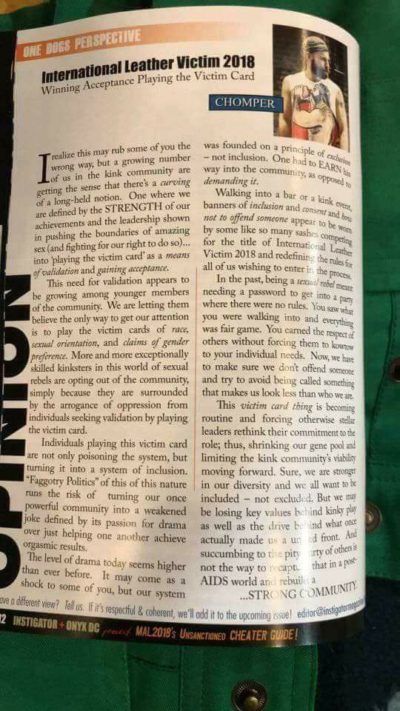 The Instigator column that has sparked debate and anger on social media.

Chomper had written an opinion piece published in Instigator Magazine that stated “playing the victim card” was weakening the leather community and driving people away. The column, which got attention just after the recent Mid-Atlantic Leather Weekend, has ignited a firestorm of commentary and outrage on social media.

The Mr. Wisconsin Leather leadership posted this statement on their Facebook page:

Over the last 18-24 hours, social media has been flooded with discussions regarding a recent op-ed piece by Chomper Schuld. Chomper is a MRWL Titleholder who’s title year has passed, and as such, MRWL does not control, input or edit any views expressed by Chomper, just as we do not control, input or edit any views expressed by any of our past Titleholders. The MRWL Organization does not condone or support any views of our past Titleholders, contestants, judges, or individuals involved in our event. Each of these individuals speak for themselves and do not speak for the MRWL Organization or our current Titleholder. MRWL has always strived to hold an event that welcomes everyone and allows people to feel safe, no matter how they define themselves, and we will continue to do that in the future. Any comments regarding Chomper’s op-ed piece should be directed to him personally. Thank you for your past and continued support for MRWL, and we look forward to continue to bring you an event you can be proud of.