MADISON, Wisc. — Mr. Wisconsin Leather began with a simple motto: ‘UNA SEMPER IN ALTIORIBUS’ – ‘TOGETHER ALWAYS HIGHER’…and with each year, we continue to work to elevate ourselves to a higher and higher standard, making MRWL not just another Leather Event, not just a Celebration, but a symbol of who we are, what we stand for, and what Wisconsin’s Leather Community, and the Leather Community in general can do when we come together.

“When you say Wisconsin, You’ve said it all!” – Centered around Capitol Square in Madison, MRWL is proud to make it’s presence known in what is easily one of the most unique parts of our Capitol City…..State Street, the Saturday Farmer’s Market, the Capitol Building, Frank Lloyd Wright’s Monona Terrace, Lakes Monona and Mendota, the Isthmus, and the nearby University of Wisconsin campus, all within walking distance and all VERY Madison!  There may be no other place where everything that is Wisconsin all comes together, thus, there can be no better place for MRWL to call home and stand up to be seen!

“Dream Big, Dream Loud, Be Proud” – From the very first year, MRWL has sought to encourage every person to stand out from the shadows, and to be proud of who you are.  We are excited to continue this mission each year and even more with the partnership with WOOF’S King Street Pride Block Party.  Madison is known as a party town, and WOOF’S King Street Pride Block Party is like none other in celebrating our LGBT Community Pride.  Food, beer/cocktails, entertainment and a city block full of people all in celebration. 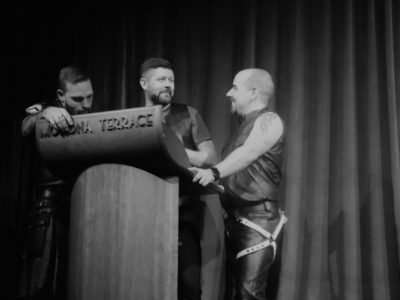 The Emcees for the contest were a trio of humorous men from the community: Bob Johson, Mr Los Angeles Leather 2006 (who emceeed MRWL I & II), and that Dynamic Duo of Disaster – Ryker, Mr Heartland Leather 2014, and Nitro, International Leatherboy 2011 (emcees of MRWL III & IV).They brought hilarity and a fun feel to the evening event down to Kinky Mad Libs.

This year there were five contestants for Mr Wisconsin Leather, 1) Mark B, 2) Pup Riku aka Chris D, 3) Shiny Marc, 4) Magnus, 5) Draco.  They introduced themselves and showed off their bar wear in the first round.  They returned to the stage in the minimal wear category and were asked questions from the judges based on their interviews earlier in the evening.  Pup Riku explained how a tea party with Maleficent and Ursula would go.  While Draco regailed us with the story of how and Professor Snape would have some fun in the Defense against the Dark Arts classroom.

In the final round the contestants came out in their Formal wear and gave some of the most amazing speeches.

Magnus spoke about being a photographer in the leather community, watching it grow and evolve. He went on to say: 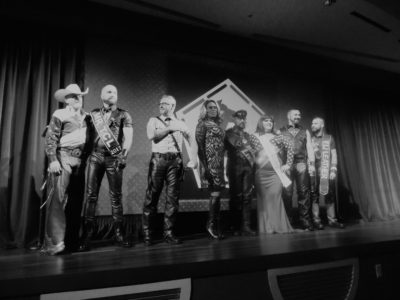 The Judges and Tally Master

“In my experience these items create memories and pictures for those who will come after us. Classes have allowed me to explore my own limits and learn to connect with others who share my love of things that get my heart pounding and my shorts tighter.”

Draco gave a moving speech: “7,665: the number of days since its been since a young boy was almost beaten to death for being considered different in our society; 24: the number of months he had to endure just in therapy to learn to speak again; 5: the number of times he tried to snuff out his light; and 2: the number of times he almost succeeded, but it wasnt until a new number came into his life and changed everything; 1: that one who took him to his first pride this year and taught him to take pride in who he is and who he will be.

There were several special moments shared through out the entire evening from Chomper being pinned into Mama’s Family as Mama’s Chomping Junkyard Dog. Chuck Renslow was posthumously awarded the 2017 Red Heart Award. Topping off the special moments was seeing Sir Jeff Gruenberger receive his cover from all the past Mr Wisconsin Leather titleholders. Chomper gave a heartfelt stepdown speech in which he told the story of where the #365daysofMRWL2017 came from and we all took one final selfie with Chomper.

Before the winner was announced the MRWL V Parade of contestants and audience was held: The contestants, judges, and audience were encouraged to bring their Rainbow Pride, Leather Pride, Puppy Pride or other flags and walk from the Monoma Terrace Rooftop Garden to Woof’s King Street Block Pride Block Party.  The winner was announced in front of the entire block party. 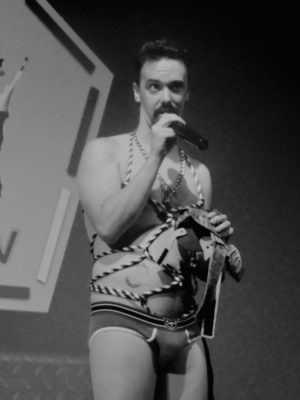 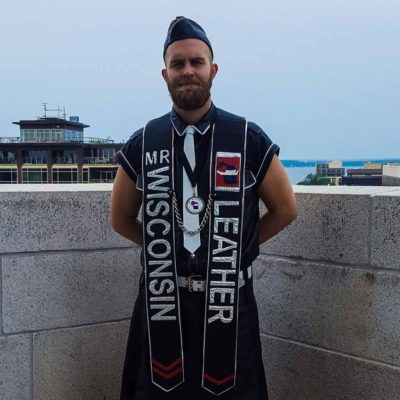