When I started this series, I was hoping to bring a new focus on a group of individuals in our community, the BOOTBLACKs. Bootblacks have been a major part of our community for as long as we have been a community. As was discussed in my article with IMBB 2017 Pup Pawlish, the International Bootblack (IBB) contest started in 1993. Harry Shattuck, who had been a regular participant at IML since it’s beginnings in 1979, introduced the first IBB contest and David Morgan was the first title holder.

In 1999, after a three year journey, the International Ms Bootblack (IMsBB) contest was held.  IBB was open to all sexes, but at the time Amy Marie Meek noticed a trend that most of the men attending went to the male identified contestants. Amy Marie realized then that with a ballot based system for voting for the bootblack, that it would be a long time before a woman would have enough visibility to win the contest. Amy Marie was the first woman identified individual to judge at the International Mr Leather contest in 1996. She approached Chuck Renslow about breaking the IBB contest into two seperate contests: IMBB and IMsBB.  There were four contestants the first year with Leslie Anderson, 1997 American Leatherwoman, receiving the title.  Your IMsBB 2017 is Elisa, from Michigan, previously holding the MI-GLLA Bootblack and GLLA Bootblack titles.

Before I spoke with Elisa, I asked her predecessor IMsBB 2016 Meghan Bootblack a few questions about Elisa: 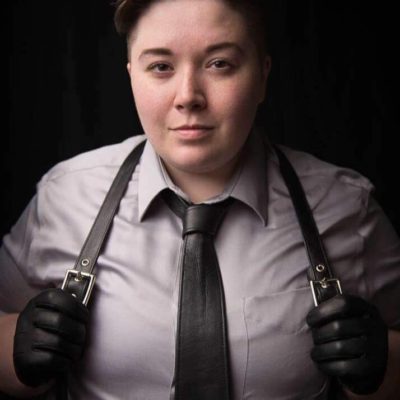 When and where did you see Elisa bootblack for the first time? What stood out?

The first time I really got to see Elisa work was when we ran together for Great Lakes Bootblack 2015. I didn’t really get to know her before the contest so this was the first time I got to see her work. Since I didn’t know her, I was so curious to see how Michigan bootblacks do things. Since we were competing together, I didn’t get to see as much of her process as I wanted! What stood out to me were the smiles coming from folks sitting in her chair. There was always laughter coming from her direction and I loved watching her interact and care for the person wearing the leather, as well.

If you could give Elisa one piece of advice for the remainder of their title year, what would it be?

One piece of advice I’d give her, I think she’s already excelling at. Carrying the IMsBB title can be very heavy and scary at times. But remembering to have fun, make it -your- year, and take no shit can be hard. I want her to have as year as incredible as I did, and I hope she gets to experience all of the good our community has to offer. I am and always will be ridiculously proud of her.

When I say Elisa what’s the first thing that pops into your head?

When you say Elisa, what pops into my head? Dinosaurs, dirty construction workers, Rutherford B Hayes, quick wit, smart as a whip, and unwavering confidence in who she is as a person. Elisa is such a joy to be around and has a great way of making you think. She’s not afraid to take a stand on her beliefs and is such a strong Leather woman that I consider myself lucky to share this family with.

I asked Elisa the same questions that I asked Pawlish and ICBB boy Patrick, these are her answers: 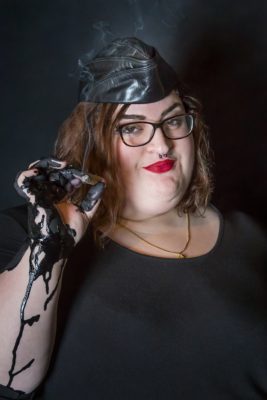 Who was the first person you remember watching Bootblack someone’s gear? Tell me about it.

It was actually at the first BDSM play party that I ever attended. I saw a friend of mine working on a pair of boots for someone I didn’t know and I was immediately drawn into watching their experience. It wasn’t sexual or scene-like at all, but it was this really lovely and palpable demonstration of the essence of service. I had been in the middle of a conversation with some other folks in the social area of the party and I just completely dropped out of the conversation to watch these boots get done. I didn’t really understand much of the technical side of what was going on but it was an intensely spiritual and surprising experience for me to witness it. I knew I was supposed to be the person doing the boots for folks.

What drew you into bootblacking?

A combination of things, I think. My initial experience was so emotional and spiritual for me that it was all I could think about for a while. The technical aspects of it really fed into my sense of perfectionism. It’s also absolutely sexual for me, although I don’t feel that way with a majority of people who sit for me. I work from a very service-oriented perspective. I want people to leave my chair feeling better about themselves in all possible ways that I’m able to improve for them. Sometimes it’s an excellent shine, sometimes it’s being listened to without interruption for a while, sometimes for s-types, it’s forcing them to rest and be served, which is often a very uncomfortable experience for fellow s-types. Once I was handed 20 bucks by a guy who didn’t want to sit and actually have his boots done, but he wanted to talk to someone who would listen and be sympathetic about a really difficult employment situation he was stuck in. I didn’t use any polish there, but it was absolutely bootblacking as far as I’m concerned.

What sense is most important for you personally in regards to blacking?

Touch, with smell a distant second. I use smell to pick between relatively equivalent products and I just use the one that smells the best to me. But touch is absolutely the way I determine if a shine is buffed out, if something is over or under-conditioned, if something needs to be cleaned again or differently or if there are unusual finishes or products that have been previously applied. Touch tells me so much about what’s going on with leather. I don’t even trust my eyes in the same way, which is why I am always skeptical of the utility of sending photos or being verbally told what’s going on with something and being asked for an opinion.

Send a pic of your kit right now, not perfected as is. An in the moment picture please.

Pic to follow, I’m at a starbucks right now, lol. 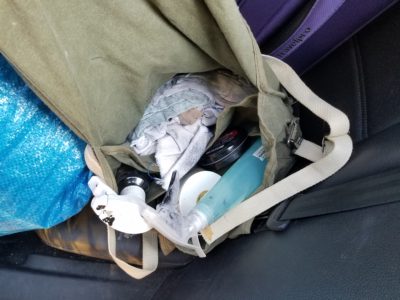 IMsBB 2017: A look inside the bootblack kit of Elisa

What is your favorite tool?

Hands! How could it be otherwise when I’m so touch-focused in how I work! But if you want me to be more specific about a tool that isn’t attached to my body, it’s probably my main buffing brush for black polish. It’s not some amazing quality item or anything, it’s a Kiwi brand product that I bought at a Target long before I ever started doing this as part of the leather community. But I put a lot of intention into it when I started learning this in the context of the leather community and it has been loyally in my kit for every single shift I have ever worked. It’s been used on leather that has been worn by people I love dearly, it’s been used in competition at every single competition I have done and it’s been in my hand for every confident thought I’ve ever had while working and every insecure and terrified thought I have ever had while working.

If you had to build a started kit for a new Bootblack what would it include?

Super easy and cheap — rags, a saddle soap and small dauber brush, spray bottle, can of black Angelus, buffing brush and a tub of Obenauf’s LP. Totals under $40 bucks and all of it is available on Amazon. There’s a whole lot of smaller things you can collect and add as you perfect your craft, but I’m a very strong proponent of just doing the work. I’m not precious about it. I see too many people get frozen up because they don’t have the most expansive kit with every possible thing they might need. Just do the work. Start practicing. Stop doubting yourself. This stuff will get you through 80% of an event, your fellow bootblacks can lend you whatever you might need or you might have to learn to disappoint someone. Asking for help and having to say no are both valuable life skills in general and also very valuable in the context of working a public stand.

Who have you been most excited to have sit in your chair?

The first person who had no idea who I was, at Leather Expo at Menjo’s in Detroit three years ago now. He had never seen me before, had never had exchanged a single word with me, had no clue what I knew or didn’t know but he trusted me enough to sit for me. He had a great story — he had been in the Navy or Marines and was wearing his service boots, that had been through Vietnam. He was in his early 70s maybe and had been in hospice only six or eight months before, certain that he was facing death from cancer and never thinking that cancer was going to be the way that he would die. It was unbelievable really. But he pulled through and came out for a big leather event and sat for a woman bootblack. I think about him fairly often.

If you could have any other ibb/imbb/imsbb/icbb sit in your chair who would it be and what one question would you ask them?

David Morgan, IBB 1993 probably. I don’t have a single question — I would just want to get a feel for what the bootblack community was like in the early 90s and what his hopes were for the role of an international bootblack title. If I am honest, I’m not much of a silver lame person. Having other titleholders sit for me is just like having any other folks sit for me. I like hearing stories and personal experiences and find them interesting regardless of the source.

If you could pass on one thing to the next person to take your title, what would it be?

I’m not sure I’m ready to think about this yet, I’ve only been doing this for a few months. I think the realistic advice is the same for bootblack and non-bootblack titleholders, which is that you will literally be unable to please everyone. As soon as you start running around trying to accommodate people who are upset with you or dislike you for whatever childish reason, you will entirely lose yourself. I think titleholders exist to give public face and space to people who are like them and can identify with them, in whatever way. And so, I spend my time trying my hardest to be my most authentic self as much as possible and engaging in what I try to think of as radical vulnerability with people. 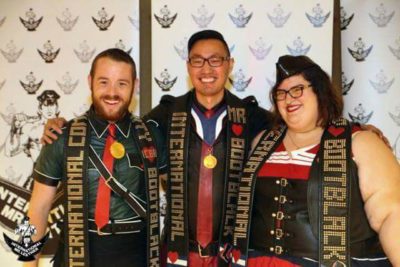