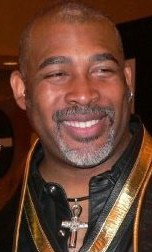 INDIANAPOLIS — The Great Lakes Leather Alliance (GLLA) Board of Directors is pleased to announce that Mufasa Ali will serve as the GLLA 2018 Keynote Speaker.

Mufasa Ali, a member of the Leather community for over 20 years and the inaugural Mr. World Leather 2006/2007, is the founder of ONYX, an international club supporting Leathermen of Color and the recipient of the 2013, 2016 and 2017 Pantheon of Leather Large Club of the Year Award. He currently serves as the Chair of the ONYX National Council, and he is the founder and primary facilitator of the People of Color Leather Caucus seminars at IML and Black Beat Inc. Mufasa is an activist and has served on Illinois Unites for Marriage, the Chicago Black Gay Men’s Caucus, the AIDS Legal Counsel of Chicago and the Chicago Advisory Council on LGBT Issues. Mufasa is a change management consultant and spiritual life coach, ordained minister, husband, father, Daddy, Dad, Papa, and Sir. He and his husband reside in Chicago with their three sons and three dogs.