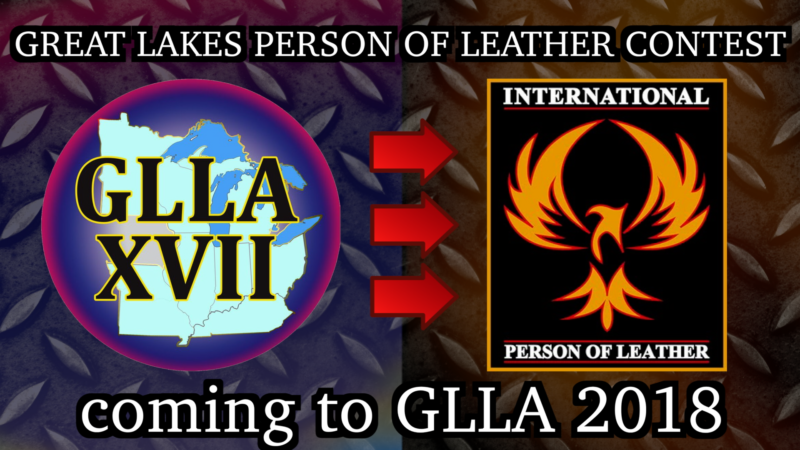 INDIANAPOLIS — Great Lakes Leather Alliance (GLLA) announced Sunday that they would be adding the Great Lakes Person of Leather (GLPoL) contest to the roster, starting in 2018.

GLPoL will feed into the International Person of Leather (IPoL) contest, which will be held at Sin in the City in Las Vegas. The purpose of IPoL is is to serve as “a celebration of the diversity in the Leather Community. The title of Person of Leather exists to promote that diversity.” According to a press release sent out by GLLA, GLPOL will be selected not based on gender-identity, sexual-orientation, race, physical appearance, age or disability, but rather on their ability to articulate their views, passions and dedications and to make an impact on their communities.

“Anyone in our region can compete for GLPoL 2018 unless their state held a state-level Person of Leather feeder contest and the potential GLPoL contestant did not initially compete at the state level,” GLLA Executive Producer Ms. Kendra said in the release. “If a Great Lakes region’s state chooses not to have the PoL title available this year, then someone from that state could come directly to GLLA and compete for the GLPoL title.”

GLPoL contestants must be at least 21 years of age to compete at GLLA 2018, and they must be able to produce a government-issued ID during the event weekend.

GLPol will be one of nine contests held during the weekend in September:

“The Great Lakes Person of Leather title will give a great balance to the contests we already have at GLLA, and I look forward to the inclusion and diversity this title brings to the family of GLLA contests,” Kendra said in the press release.

GLLA 2018 will occur September 6-9, 2018 in the same Indianapolis, Indiana host hotel as GLLA 2017. For more information and to register, please visit https://greatlakesleather.org.

The GLPoL application and eligibility requirements will be available on the GLLA website (https://greatlakesleather.org/) in the near future. The GLPoL contest will use Olympic scoring, and, patterning itself after the IPoL contest, GLPoL contestants will be judged within the following five weighted categories:

For more information about the GLPoL 2018 contest, please submit your inquiry via the GLLA “Contact Us” portal: https://greatlakesleather.org/index.php/about-us/contact-us.